In the 8th century AD, Mahaguru Padmasambhava, popularly known as Guru Rimpoche, blessed Sikkim or Denjong asbey – yul or a hidden land.  The sacred Sikkimese Scriptures, Dey-jong Nay-yik and Ney-sol Pecha (prayer texts dedicated to deities in Sikkim) mention about three stages of discovery and civilization in Sikkim as, early, middle and later or modern period, predated by the existance of the Lepcha tradition.

Dejong Nayyik gives the description of Sikkim as Bayul Demo Jong written in many Buddhist scriptures discovered or revealed by a number of Tertons (Dharma treasure revealers).

Naysol Pecha, written by Gyalwa Lhatsun Chenpo is a prayer text describing the whole range of Sikkim as Phu (interior), Dha (lower) and Bar (middle) parts as regions where guardian / local deities were posted for the protection of the land. He has given detailed names of the deities reminding them of the promises made to Guru Rinpoche. Forseeing, the possibility of defilement of these abodes of deities in future, words were put in the book to appease them by prayers and offerings of SANG, SERKEM and TSOG.

Khangchendzogna, the main protector deity of Sikkim, is said to reside on the eponymous mountain, Mount Ghangchhen mZod Nga which was blessed by Guru Rinpoche. The Sikkimese revere this  sacred mountain peak surrounded by hundreds and thousands of other peaks, lakes, rocks, trees / groves and meadows, regarded as the abodes of local deities of Sikkim.

In the early period, Chenreyzig, Dolma Tronyerchen and Guru Rinpoche, accompanied by 25 of his foremost disciples, blessed this land and marked Tashiding as the epicentre of the Holy Land.  Four holy caves blessed by Guru Rinpoche are located in the four directions of Tashiding. In the middle period, Terton Rigzing Goedemchen (1337- 1408) located and blessed this hidden land. The later period commenced as prophesised by Guru Rinpoche,  in the middle of the 17th century AD with the advent of the Naljor Chedshi - the meeting of 4 yogic brothers.

'Shangrila'- "The Hidden Land", a sacred map of Beyul Demajong (Sikkim) according to the scriptures.

Until that period, the hidden land was under the charge of Mon Thekongsalang, a Lepcha chief blessed by Guru Rinpoche as ‘Neydak’ (protector of the holy land). The foot prints and body marks of Guru Rinpoche on rocks, in holy caves and the stone coronation throne at Yuksam, as also the foot prints of Gyalwa Lhatsun Chenpo at Yuksam Norbugang and seat of Mon Thekongsalang at Thrakthungrong in West Sikkim bear physical testimony of these historical facts. 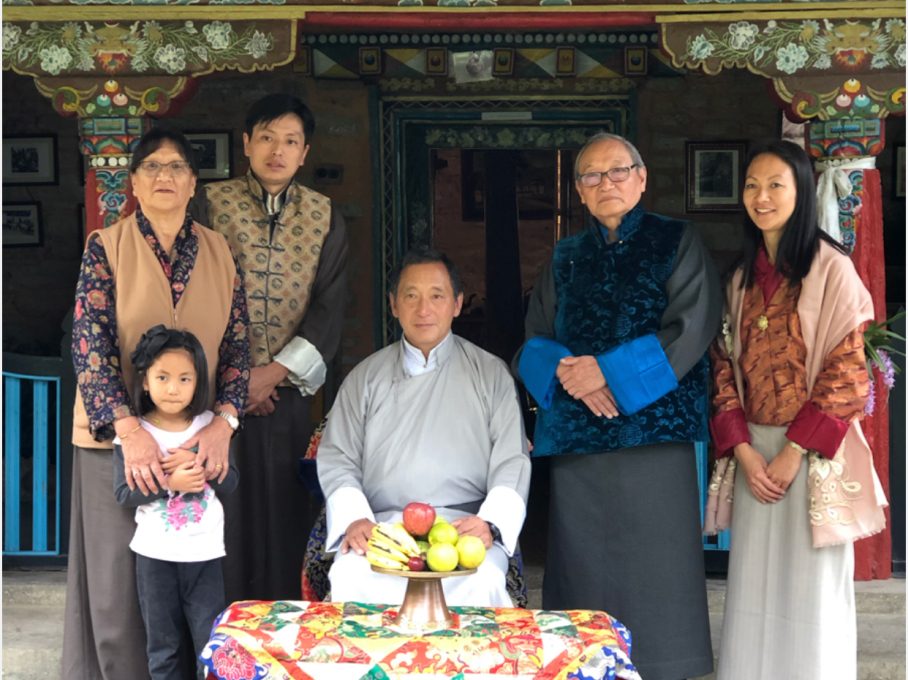 Members of the Biksthang Family with the 13th Chogyal Wangchuk Namgyal of Sikkim in Biksthang.

Sikkim is located in the Eastern Himalayan range of young folded Mid-World mountain belt, formed about thirty (30) million years ago.

Sikkim has a Himalayan type or High Mountain type of climate. Relief features such as high mountains act as bearers for the movement of monsoon winds. Low temperature, high rainfall on windward slopes, comparatively dry on the leeward side, and heavy precipitation in the form of snow at the top of the mountain are the main features of Sikkim climate.

The climate of Biksthang at 4200 feet has an annual rainfall of about 3000mm and the temperature ranges from about 5°C in winter to about 30°C in summer.